Nestled in Eastern Europe, the small country of Belarus is very transitional for neighbouring countries where HIV is prevalent, including Russia and Ukraine. Belarus carries a high burden of HIV: since 2010, new HIV infections have increased by 65% and AIDS-related deaths have increased by 13% (UNAIDS). Less than half of the people living with HIV are receiving treatment.

The Soviet regime still holds power in Belarus, and is not interested in sharing these health concerns with the rest of the world, or in investing in charities that are working to support the people of Belarus. There is strong opposition to charitable work and churches.

The underlying political tension has caused cuts in services to young people, including health services and recreational activities.

At the same time, the internet has exploded onto the scene, with young people spending hours online. Many young Belarussians report that this is their only connection with others: but tragically this can lead to people feeling more isolated and alone.

The rise in isolation and depression sees many young people turn to alcohol, drugs and - longing for intimacy - dangerous sexual activity. But they lack wise counsel on relationships and sexual health.

There has also been a steady increase in the number of young people taking their own lives. In the final 2 months of 2018, there were 5 teenage suicides in Brest alone.

Despite resistance to charitable, and Christian, interventions, ACET Belarus are striving forward, bringing hope, engagement and connection, along with lessons on sexual health and drug and alcohol abuse. In a country characterised by division and isolation, ACET Belarus is truly remarkable.

A network of 209 volunteers from Catholic, Baptist, Evangelical, Orthodox, Pentecostal, and Gospel churches are promoting healthy lifestyles to young people in six regions across the country.

They do this through outreach to prisons, talk shows, lectures (in schools and universities), parent evenings, and teacher events, equipping them to talk to young people about sex and relationships. During 2017/2018, ACET Belarus ran 750 activities, in 6 regions, for 27,842 young people, their parents and teachers. In addition, ACET Belarus ran 7 talk shows, reaching 735 young people. These covered topics of HIV and AIDS, the purpose of life, relationships and sex.

As a result of the sessions, there has been an encouraging shift in young people’s knowledge and attitudes to sex, sexual health, HIV and their own sense of worth. Indeed, before lectures, only 38% of 418 beneficiaries believed sex is something worth saving for a committed faithful relationship, compared with 82% following the sessions. 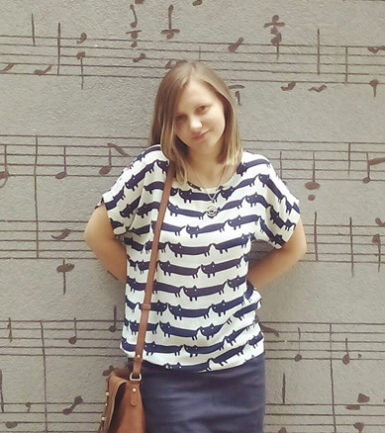 Sofia* (pictured left), a student at music college, tells us:

“Before meeting ACET Belarus, I was very lost and without purpose. I felt completely inadequate, and considered suicide. I didn`t know how to get over that feeling. There was nobody to talk to.

ACET Belarus came to run a lecture in my college. This lecture was a masterpiece! We couldn’t believe there is an organisation that would talk to us in our own language. The video about HIV prevention really impressed me. It was not filmed far away in America or Africa, but here, in Brest, making it really relevant.

I was so impressed that I contacted ACET Belarus after the lecture. They helped me with so many things. I recognised my self-worth and they helped me find direction in life so as not to fall onto a ‘dangerous path’. I`ve got a plan, that’s the most important thing!

I have a goal and a reason for being. Who could have thought that all this is thanks to just one meeting that changed my life so radically! Not everything is clear, of course, but I have confidence. Thanks to ACET Belarus, our country has a chance to become happy!”