ACET DRC on the radio 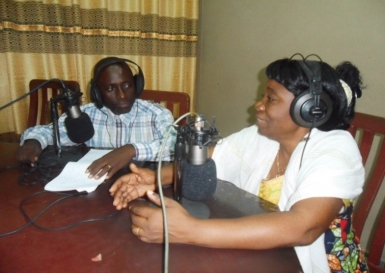 HIV prevalence in DR Congo can be partly attributed to the cultural view that sex is taboo. Erroneous cultural beliefs about sex, and unequal power relations, have led to widespread sexual gender-based violence, engrained in society. The result is HIV stigma and a barrier to widespread relationships and sex education: up to 84% of sexually active people do not know their HIV status.

Your support is transforming young people’s lives by providing ACET DRC intervention programmes: educating communities about HIV and AIDS, and sexual and reproductive health. ACET DRC is working towards putting an end to deeply-rooted, dangerous sexual practices by replacing them with accurate information.

One powerful way ACET DRC reaches the wider community is through radio broadcasts. Recently, a young man contacted ACET DRC following a broadcast about STIs.  He recognized that he had all the symptoms of an STI that had been talked about which, despite multiple treatments, had persisted.  ACET DRC referred him for appropriate treatment, which then resulted in him, three of his sexual partners, and his friends getting tested for HIV and learning their status.

Another listener called into the radio station, so she could share her testimony with young people. She had lived with HIV for 20 years and wanted to contribute to reducing the spread of the virus.

back to the newsletter summary