The people behind the statistics

That’s the estimated number of people who are living with HIV globally.

What I would encourage you to do this World AIDS Day is to think about the names, faces and situations of the people behind the stats.

For example, think of Annabel* who we trained to enable her to share her story in schools in the south of England. She told us that she experiences more HIV stigma today than 20 years ago because HIV is no longer on the agenda for many people which means it’s not discussed as openly as it could be.

Think of Meena in Hyderabad who is working to support her children and her husband who, as well as also living with HIV, is living with leprosy too.

Think of Greatman, aged 13, a double orphan being looked after by his grandma in a rural community in Zimbabwe. He is on ARV medication which needs to be taken with food. He is small for his age and his nutritional needs are 50-100% greater than a healthy child’s yet the lack of rain in the rainy season and the economic climate in Zimbabwe mean that it is a challenge for him to access the food he needs. 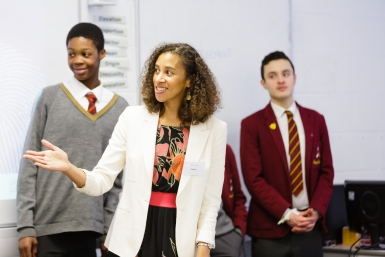 Although there have been dramatic advances in ARV medication over the years, many people living with HIV still face a number of challenges, stigma being one of them. This is partly due to misconceptions about how HIV is transmitted. In our Esteem schools work in the UK, we often need to do a lot of myth-busting around HIV because the students have little understanding about it and often associate HIV with just certain groups of people. Raising awareness, talking about prevention and tackling stigma are three key areas of our work in schools.

This World AIDS Day, as well as wearing a red ribbon to show solidarity with our brothers and sisters living with HIV around the world, please take time to think about what it might be like to be in Annabel, Meena and Greatman’s shoes.

If you’re interested in finding out more about our HIV work, do get in touch.