As Women’s Equality Day is celebrated on 26th August 2017, the question of why gender equality is important seems to be returning to the fore of the global agenda for change. Worldwide, most countries recognize that equal rights should exist between men and women, and many have produced regulations intended to fight discrimination. Most would agree that women need equality. This includes, among other things: 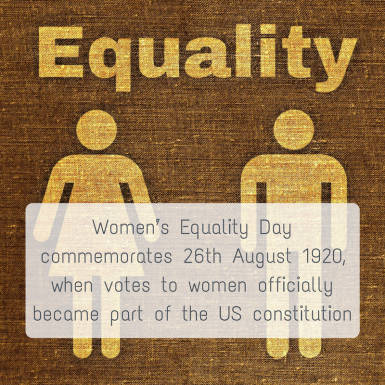 This topic, often difficult to address it seems, is currently being given more air time, more investigation, to go with the voices of equality that have long sung out across our planet. Here in the UK, the BBC have been accused of discrimination due to the gender pay gap that was revealed when they published the salaries of their top 96 earning stars. In the past few days, the corporation aired a two-part documentary, No More Boys and Girls: Can Kids Go Gender Free? which challenges gender stereotypes. In the world of advertising, the Advertising Standards Authority is toughening the rules around ads which perpetuate sexist stereotypes by mocking those who do not conform to stereotypical gender roles, whilst also tackling ads that ‘body shame’ (especially women).

We may not feel that equality for women in the UK is an issue, as women are steadily working their way towards becoming the equal counterpart of men. We may not realise, as women or men, cushioned in our modern lives, that gender inequality even exists. Or we may, as a woman or man, have experienced a definite gender inequality – amongst our families and friends, work or home life. It may be easier for us to see this type of inequality in the developing world – where women and men, families, and communities are suffering due to the gender discrimination engrained in many societies.

The fact remains that inequality in all forms does exist in our world. And there is clear evidence that inequality exists between men and women. It is my view that most of humankind would not choose inequality of any kind, and that most gender inequality exists because it is inherent in our traditions and systems. Change takes time, and is often dependent on a minority to establish change for the majority. As a majority, we can play our part in closing the gender equality gap, if we choose to. And we can pass the baton of equality to the generation that follows us. Through promoting, and educating young people in, healthy relationships and self-esteem, and opening the communication between the generations, we can bring equality into balance between the sexes.

Why not talk to the young person/people in your life about gender equality? You could try one of these videos, or similar, as a discussion starter:

WorldFish’s three minute animation about how promoting gender equality will also combat poverty, hunger and boost shared prosperity for all.