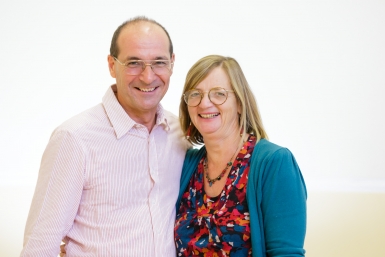 In his work as a physician in the 1980s, ACET founder, Dr Patrick Dixon, began to meet patients with HIV, who had been refused care at home or in hospices as a result of the fear and discrimination that surrounded a then largely unknown and misunderstood virus. Following the publication of his book The Truth About AIDS, Patrick founded ACET in 1988, as a compassionate response to the HIV pandemic.

ACET grew rapidly, providing home care for HIV and AIDS patients across Greater London, as well as delivering an HIV prevention programme in schools. Trained volunteers were supported by a professional team, and soon home care and schools teams developed in other parts of the UK. Independent ACET teams were also established in Uganda, Thailand, Romania and other countries.

In the UK, partly as a result of campaigning by ACET, the National Health Service eventually took responsibility for the care of HIV patients. Awareness of how the virus is transmitted and can be prevented grew, and the first anti-retroviral medicines, which could control the HIV virus and prevent AIDS from developing, were made available.

However, HIV and AIDS remained a huge problem in other countries, especially in Sub-Saharan Africa. Lack of knowledge about the virus, stigma and poor access to treatment resulted in the rapid spread of HIV, many AIDS deaths and millions of children being orphaned. acet UK began to focus on providing technical and financial support for other ACET teams who were working in countries facing these challenges. In the meantime, the UK schools programme developed to become Esteem, which now covered a wider spectrum of relationships and sex education. In 2002, Esteem became part of Oasis Trust and then an independent charity in 2011. Throughout all these changes, Esteem and acet UK continued to work closely together, and in 2014 Esteem once again became an acet UK project.

acet UK’s Esteem team now equip youth and schools workers, teachers and health professionals with the knowledge, skills, resources, and confidence to educate young people across the UK about relationships and sex. We also deliver the programme directly to young people ourselves, with best practice models in Southwark and Cheshire, and are increasingly working with parents to support them in engaging with their children on these topics.

Many of the ACET teams overseas have also developed their services in response to the needs of their own beneficiaries: services include prevention of mother-to-child HIV transmission, HIV testing and counselling, support of orphans and vulnerable children, as well as training and capacity-building of churches and community organisations to deliver high-impact HIV care and prevention programmes.