Many of the men and women in the prisons in Belarus have poor knowledge and awareness of HIV and lack the skills necessary to develop positive lifestyle choices, safe behaviours, and healthy relationships.

Additionally, there are high levels of stigma and aggression towards people living with HIV, exacerbating the difficulties they already face during time in prison.

In response to this need, ACET Belarus provides educational seminars in prisons about HIV, drug and alcohol use, and suicidal thinking. The seminars also help prepare inmates for life after prison, by providing guidance and skills training, to enable them to integrate successfully back into society once they are released. The project does this by helping inmates understand family values, set personal goals, prepare for employment and explore their potential.

After one seminar, a group of 11 inmates approached ACET Belarus’ Yury to express their gratitude. One man proposed having a long-term contract with ACET Belarus so that he could attend all their seminars and increase his knowledge throughout the entire term of his sentence! He later told Yury that he writes a letter home after each seminar, in which he briefly describes his impression of the session and tries to teach his 12-year-old daughter the values that he is learning.

Alexei*, an inmate at a prison in Brest, responded to the project, saying, "I don’t know how you do it, but every time you come, our mood lifts! The inmates like the way you talk about HIV and about family, we understand more things about HIV and AIDS now. But what really gets our attention is that, when we look at you, we understand that you know what you are talking about and, most importantly, are not lying. What you are saying about children and what we can still teach them while being in here - this is very important! I have never thought that I could discuss really serious issues with my daughter when writing to her, or that somehow I could help her not to mess things up in her life. Thank you very much for your advice."

As well as the seminars, the ACET Belarus team organise other activities, including concerts and theatre performances. One inmate was moved to say, “Thank you very much for the concert: to hear a flute being played live is awesome! Thank you for seeing us as humans and not just convicted offenders.”

One of the prisons has recently given ACET Belarus permission to broadcast eight educational audio recordings, covering the topics of family values and drug use. These recordings will be played twice a week on the prison broadcasting network, reaching over 1,000 inmates. The prison deputy has also suggested recording an audio clip of ‘spiritual content to promote moral values.’ This is an exciting opportunity and the recording is currently being edited.

Michael and his partner in Germany.png 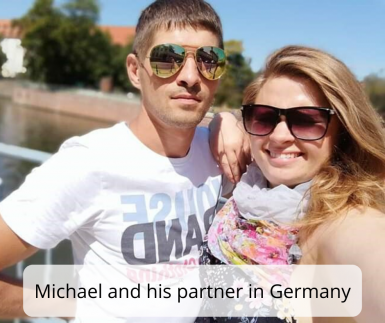 Michael* is a former prisoner who struggled with drug addiction. He attended ACET Belarus’ lectures whilst in prison and, following his release, contacted the team to thank them for all they did to support him.

In his own words, he describes the impact the project has had on his life, “Your lectures and seminars gave me the strength to handle being in prison, and helped me think about what I want out of life, how I can reach my potential, and knowing who I am. I came to understand the dangers of drug addiction, and learnt to set goals and know how to achieve them.”

Michael now lives in Germany, is working for a manufacturing company, and is planning to get married to a Christian lady he has met there, and start a family. Thanks to ACET Belarus’ prison outreach, Michael was given a second chance and has been able to turn his life around.

Donate to this work