What is grooming and how can RSE combat it?

So, what is grooming?

The NSPCC defines grooming as ‘when someone builds a relationship, trust and emotional connection with a child or young person so they can manipulate, exploit and abuse them.'

They emphasise that anyone can be a groomer - and that grooming can happen both online and in person.

People at any age can be groomed and many may not even acknowledge that their relationship was, or is, an example of grooming. But young people, in particular, are a target, as they are especially vulnerable – and grooming is a power dynamic where abusers prey on the vulnerable.

Furthermore, as lockdowns continue to persist and young people learning remotely spend more time away from their normal support networks; many are suffering from boredom, loneliness, and mental ill-health.

With an array of new social media apps that present a distinct opportunity for predators to target and have access to young people, grooming is a significant risk to those who may be desperate for affirmation and engagement.

So, how can RSE help?

Without RSE delivered by qualified educators, many young people's perceptions of what healthy relationships look like may be distorted and marred by a number of factors. Ideally, young people would see positive role models at home but sadly many young people grow up in circumstances that do not provide this.

Often young people mimic the relationships they've been exposed to, whether it be at home or online and in the media. For example, male-dominant power dynamics are often romanticised, such as in the Twilight vampire series, 50 Shades of Grey, and more recently, the popular Netflix 'The Kissing Booth' films.

Of course, it is not only men who can exert power over young people: women can be groomers too. So, it is important that this is also addressed through good quality RSE, to challenge a widely held perception that boys are rarely victims.

A sample survey in 2018 carried out by YouGov and Barnardos suggested that 64% of UK adults believe that teenage girls are more vulnerable than teenage boys - and 28% thought it was every teenage boy’s dream to be with an older woman!

Barnardo’s research also found that boys often miss out on the support they would receive if they were female, as professionals do not always recognise boys as victims.

Formal RSE reinforced by supportive parents and caregivers, and the wider community counters this. It teaches young people about healthy and unhealthy relationships and highlights the traits to look out for, giving young people the skills and tools to deal with situations that could potentially lead to grooming, and helps when they have already reached that stage.

It breaks down the brutal reality of abusive power dynamic relationships, so often glamourised by the media, giving young people the much-needed clarity to make good decisions about how and who they engage in relationships with.

Moreover, starting RSE at a younger age, before children are exposed to movie and TV’s often problematic storylines, means that as children grow into teens, they are already equipped with the skills needed to assess whether what is presented to them in the media or in their surroundings is actually healthy.

Battling Hollywood, social media and other influences on the power they have over young people’s relationship dynamics is not easy, but it's a step in the right direction. 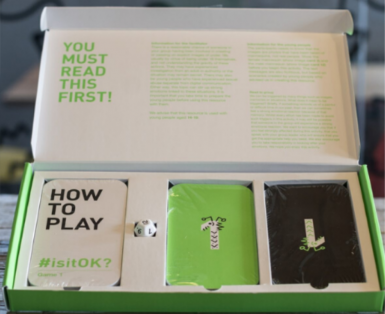 The NSPCC suggests 15 - 40% of teenagers are involved with sexting (sending of sexually explicit images or text).

To help educators talk to young people about sexting, social media, and staying safe online, we worked with Youthscape to create the #IsitOK? resource, a card game for young people.

Find out more and purchase a copy here.

"It’s been great to have a fun activity to use to teach on the law around sexting, as well as the emotional & social consequences, to think through consequences of the images bring viewed by potential partners, bosses, children, family & friends." RSE educator and youth mentor