Despite two lockdowns being imposed this year, the Shining Star Project has trained and mentored 75 girls and women engaged in sex work to become peer educators in their communities. These impassioned ladies have reached 826 sex workers and young women with crucial sexual health information.

The project team have also reached out to an incredible 807 students and 512 men with messages on safer sex and women’s rights, and are supporting 20 teen mums.

In addition to the original work in Bulawayo, the project recruited and has been supporting 20 women in Hwange. We are thrilled that all 20 have had business proposals approved and will be supported in these business ventures in order to create pathways out of sex work. The businesses include selling second-hand clothes, poultry, fruit juice and detergent making.

31 year old Aneni* lives in Empumalanga, a high-density suburb of Hwange characterised by beer halls, pubs and shabeens (illegal liquor selling points usually at peoples’ homes). There are a high number of young women involved in private or public sex work in the suburb. 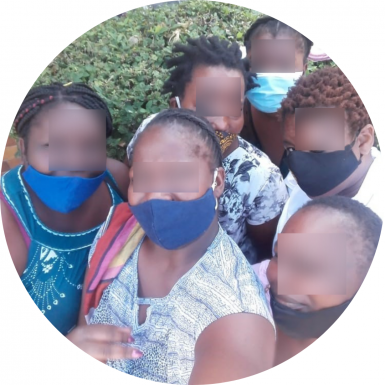 "Before coming to the project I was a vendor, selling groceries that would be in shortage at a given time. I had challenges of low sales in terms of business, and most of my clients would pay using mobile money called Ecocash. So I would also engage in private sex work to make money - I did not want my family to know.

I attended school and I ended up at ‘O’ level although I did not do so well in my studies. My relationship with my family was good as we hardly had any challenges — except for the poverty episodes that we experienced.

I was invited to Shining Star by a friend and I was captured by the information that they were sharing.

I received lessons on HIV and AIDS, and have learnt a lot concerning this, what it is and how to prevent it, as well as how it affects people. I have learnt to take care of myself and to value who I am. I was assisted in having a VIAC done [cervical screening] - I never used to see its importance.

I received funds to boost my business and, after the skills training and business classes, I learnt not to lend my goods as some of the customers would not pay on time, while some did not pay at all.

Without Shining Star, I would be nowhere, stuck with a lack of business know-how. I just want to thank the Project for teaching and encouraging us to be self-reliant."